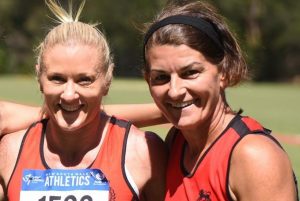 Davis also finished second behind Perry in the 200m and won the 800m as well as the high jump, beating another training partner Alice Bohdan.

Sebastian Arko and Nicholas Dowling both ran fast times over 60m with Arko winning the under 16 years event and Dowling the under 18 years race.

Both boys also won their 200m races with Dowling recording a faster time than his father Ryan, who was second in the men’s 40+ years age group.

Arko had a big day out, also winning the 800m and the high jump.

David Turner and Caerl Murray finished one-two in the men’s 40+ years 60m while Ashley McMahon took out the 200m in quick time. Ron Bendall squad athletes filled all three places in the event with Ryan Dowling second and Turner third.

Dowling also won the high jump and discus and was second in the 800m.