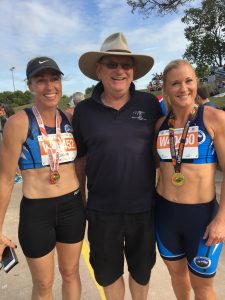 Alice Bohdan got the Ron Bendall squad off to a great start on Day 1 of the Australian Masters Championships in Melbourne, winning the opening event, the 45+ years women’s long jump.

Third behind Monique was Jo Davis, who ran a personal best time to win her first ever national medal.