Anything they can do, Monique can do better! 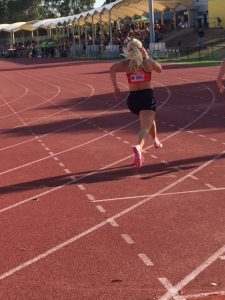 Monique Perry rounds the bend in the 200m at Bankstown

Not to be outdone by the junior members of the Ron Bendall squad, masters athlete Monique Perry ran a personal best in winning her heat of the open women’s 100m at Bankstown Allcomers meeting.

As well as running a personal best, Monique also broke her own UTS Norths 40+ years club record. She also won her 200m heat.

Alice Bohdan also got in on the PB act, running a personal best in winning the 80m hurdles. She also finished second in the high jump.

Jenny Schell was third in her heat of the 200m.