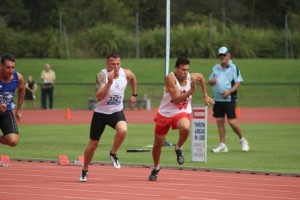 Matt Wood showed he is on target for the Australian All Schools Championships in December with two outstanding performances in the Treloar Shield meet at Illawong on Saturday.

World Masters champion Jackie Bezuidenhout and training partner Ashley McMahon dominated the Masters sprint events annihilating their opposition in both the 100m and 200m. Jackie, 48, gave her younger rivals a bath in the 35+ years women’s events while Ashley was too strong in the men’s 35+ years sprints. He also won the 325+ yeard long jump.

Jackie’s training partner Alice Bohdan finished third behind her in the 200m and fourth in the 100m and ran lifetime best times in both races. Maria Cimino also competed in both races, running personal bests on both occasions.

Berni Viljoen also set a personal best time in the u/20 years women’s 100m as did Alec Diamond in the u/20 men’s 100m. Alec also won the u/20 shot put and discus and was second in the long jump.